It is in the early 80's when Reymond Clavel (professor at EPFL - École Polytechnique Fédérale de Lausanne) comes up with the brilliant idea of using parallelograms to build a parallel robot with three translational and one rotational degree of freedom. Contrary to opinions published elsewhere, his inspiration was truly original and does not come from a parallel mechanism patented by Willard L. Pollard in 1942, which at that time was not known to Professor Clavel. The latter calls his creation the Delta robot, without suspecting that at the turn of the century, it will establish itself as one of the most successful parallel robot designs, with several hundred active robots worldwide. In 1999, Dr. Clavel is presented with the Golden Robot Award, sponsored by ABB Flexible Automation, for his innovative work on the Delta robot.

The basic idea behind the Delta robot design is the use of parallelograms. A parallelogram allows an output link to remain at a fixed orientation with respect to an input link. The use of three such parallelograms restrain completely the orientation of the mobile platform which remains only with three purely translational degrees of freedom. The input links of the three parallelograms are mounted on rotating levers via revolute joints. The revolute joints of the rotating levers are actuated in two different ways: with rotational (DC or AC servo) motors or with linear actuators. Finally, a fourth leg is used to transmit rotary motion from the base to an end-effector mounted on the mobile platform.

The use of base-mounted actuators and low-mass links allows the mobile platform to achieve accelerations of up to 50 G in experimental environments and 12 G in industrial applications. This makes the Delta robot a perfect candidate for pick and place operations of light objects (from 10 gr to 1 kg). Ideally, its workspace is the intersection of three right circular tori. The Delta robots available on the market operate typically in a cylindrical workspace which is 1 m in diameter and 0.2 m high.

As simple as it is, the design of the Delta robot is covered by a family of 36 patents of which the most important are the WIPO patent issued on June 18, 1987 (WO 87/03528), the US patent issued on December 11, 1990 (US 4,976,582), and the European patent issued on July 17, 1991 (EP 0 250 470). Overall, these patents protect the invention in USA, Canada, Japan, and most West European countries. The patents do not specify the way in which the Delta structure is actuated in order to incorporate the basic design as well as its variants (such as the Triaglide or the Linapod).

The Delta Robot on the Market

The history of the Delta robot marketing is long, complicated, and intriguing. It all started in 1983 when the two Swiss brothers Marc-Olivier and Pascal Demaurex created the company Demaurex based in Romanel-sur-Lausanne, Switzerland. After purchasing a license for the Delta robot in 1987, their major objective became to commercialize the robot for the packaging industry. After several years, Demaurex succeeded in occupying a major place in this new difficult market. The company product went through a number of modifications. Four application versions were commercialized under the names of Pack-Placer, Line-Placer, Top-Placer, and Presto. Demaurex now claims to have sold some 500 Delta robots worldwide. 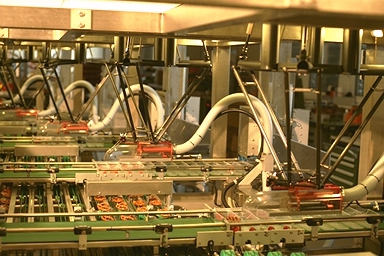 The patent on the Delta robot was bought by the brothers Demaurex from EPFL in 1996. However, before the transaction took place, EPFL had already sold two licenses. The first one concerning the robots of small dimension (arm + parallelogram < 800 mm) was attributed exclusively to Demaurex in 1987. The second one, concerning robots of larger dimensions, was sold to AID and later resold to DeeMed. This company, bought later by the Swedish Elekta, specializes in the surgical domain and manufactures a Delta robot used to carry a heavy (20 kg) microscope (SurgiScope). The Delta robot technology was consequently sold to Medtronic at the end of 1999. 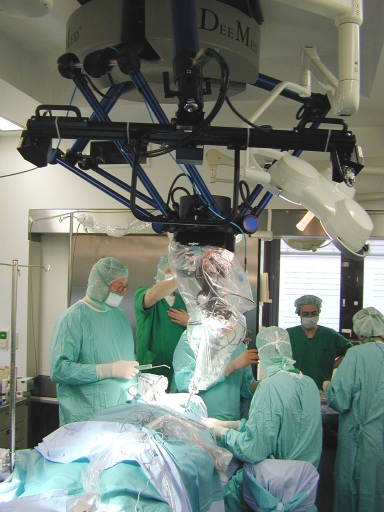 Before the SurgiScope transaction, Elekta IGS entered negotiations over its Delta license with the Zurich based Global technology group ABB. As a result, ABB acquired a license to manufacture Delta robots of larger dimensions. In the meantime, Demaurex announced its decision to produce robots of greater dimensions (almost 1,200 mm). However, Demaurex may not produce robots of dimensions greater than that, since the company undertook the obligation not to enter the over 1,200 mm market, when it purchased the exclusive under 800 mm license.

It seems probable that Demaurex negotiated with the German GROB-Werke over the license to produce the TRIAGLIDE 5g, as well as with Mikron Technology Group for their Triaglide, both of which are Delta robots with linear motors. It is interesting, though, that the Krause & Mauser Group has a patent for their Quickstep 3-axis milling machine (US 6,161,992) which is again a Delta robot with linear drives. In addition, Renault Automation Comau introduced at EMO'99 in Paris their Urane SX milling machine which is remarkably similar to the Quickstep design.

ABB Flexible Automation launched its Delta robot in 1999 under the name IRB 340 FlexPicker. Three industry sectors were aimed — the food, pharmaceutical, and electronics industries. The FlexPicker is equipped with an integrated vacuum system capable of rapid pick and release of objects weighing up to 1 kg. The robot is guided with a machine vision system by Cognex and an ABB S4C controller. Optionally, the robot may be equipped with a motion controller and vision system by Adept Technology. The attainable velocities are 10 m/sec and 3.6 deg/sec (about 150 picks per minute), and the accelerations are up to 100 m/sec² and 1.2 rad/sec². The robot comes in two versions, one of which is sealed, corrosion-resistant wash-down version, designed especially for clean-intensive environments.

After more than fifteen years as the sole player on the market, Demaurex suddenly faced the decision of the Swedish giant ABB to enter this lucrative market. In an attempt to ensure its long-term stability, Demaurex changed its line of production from naked Delta robots to complete robot cells. However, in order to gain a world market, the small Demaurex started looking for a partner. And it is thus, that Demaurex became acquired by the Swiss Group SIG at the end of 1999.

The SIG Group consists of three branches, of which the SIG Pack branch, only, employs some 2,000 workers — a company big enough to offer Demaurex the so much needed access to the world market. Demaurex will keep its name and even its two founders and CEOs. Presently, three different Delta robot models are offered by SIG Pack Systems, whereas the C23 and C33 are manufactured by Demaurex while the CE33 is fabricated by SIG Pack Systems.

The Delta Robot In Academia

The Delta robot design has attracted great interest not only in industry but also in university labs. A number of variants have been proposed in the literature but most of those that have been prototyped stay close to the original design. One such modified Delta robot was built at the University of Maryland. Another, modified version was constructed at the University of Genoa. In that design, the parallelograms are replaced by equivalent mechanisms. Yet another highly-optimized version, NUWAR, was built in the University of Western Australia. The NUWAR is claimed to reach accelerations of up to 600 m/sec² and differs from the other Delta robot versions in its non-coplanar arrangement of the axes of its rotary actuators. Three linear-motor versions were also constructed at Ferdinand-von-Steinbeis Schule, ETH Zurich, and the University of Stuttgart. Another linear version and two conventional Delta robots were fabricated in the scope of student projects at the University of Michigan (1, 2, 3, 4). A classical Delta robot was also modeled at LIRM. A more different application of a slightly modified Delta robot, as part of a decoupled 6-DOF haptic interface, was implemented at Tohoku University. And an even more original application of the Delta robot, as a vegetable transplanting device, was implemented at Dalhousie University.

Naturally, the greatest concentration of Delta robot family members is found at its birthplace — l'École Polytechnique Fédérale de Lausanne (EPFL). There is a haptic device built by EPFL's Virtual Reality and Active Interfaces Group. Their Delta Force Feedback Device is commercially available for about 20,000 USD. Another typical Delta robot was also constructed at the EPFL's Automation Institute. And of course, several Delta robots (Delta 720, Linear Delta, and MicroDelta 240) were built by the Parallel Robotics Group headed by Prof. Reymond Clavel. Astonishingly, one of the latest inventions of that Group makes use of the same parallelogram concept in order to construct a robot with only orientational degrees of freedom (Argos).

The Delta robot remains without competitors in the sector of rapid transfer robots. Chances are that next time you savour delicious chocolate candies, they would have been placed in that fancy box by the rapid hand of a Delta robot.